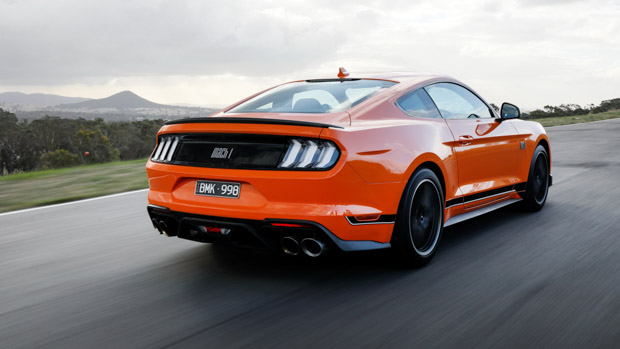 Developed partially as a replacement for Australia’s own XR-rated Ford Falcon sports sedans, the sixth-generation Mustang really is the first ‘pony car’ that could have competed head-to-head with Australia’s own muscle cars.

Enter the Mach 1, which borrows liberally from the Shelby parts catalogue to create a hardier Mustang that can stand up to track abuse.

More affordable than similarly track-oriented two-door beasts like the BMW M2 CS, the Mustang Mach 1 is visually identifiable by a number of unique styling cues.

These start with a unique front bumper – which nods its head to the original Mach 1 – a set of 19-inch alloy wheels that are wider by half an inch (though the tyres are the same size) and the Mach 1 logo on the back.

In addition, the Mach 1 gets bespoke suspension with lower and stiffer front springs, new swaybars and retuned Magneride dampers all with regular track use in mind.

That said, the tweaks haven’t hurt the Mach 1’s on-road manners, in fact it rode more deftly than the standard GT with far greater control over large compressions. There was only a small sacrifice in comfort, with NVH largely on-par with a regular GT.

But the best part about the suspension tweaks is that this Mustang now moves as one. The front end responds crisply on turn-in inspiring confidence to push harder, do so and Mach 1 sits flat through the mid-corner and really allows the driver to choose what happens on exit.

Compared to the regular GT, the Mach 1 eggs the driver on to turn in faster and commit more where the standard car rolls and responds unpredictably to throttle inputs. That said, no suspension changes can help the Mach 1 outrun its 1,754kg kerb weight which affected its ability to deal with fast off-camber corners.

In practice, this didn’t matter with the Mach 1 never struggling to find grip (save for deliberate provocations) or overheating during track sessions.

Ford has fettled with the Mach 1’s exhaust adding larger 4.5-inch tips and a new central resonator that is bordering on anti-social in Track mode. Switch the drive mode back to Sport or Normal and the Mach 1’s hard-edged soundtrack softens into a gurgle that warms the soul like a sip of good whiskey.

This article originally featured on chasingcars.com.au and can be viewed here.