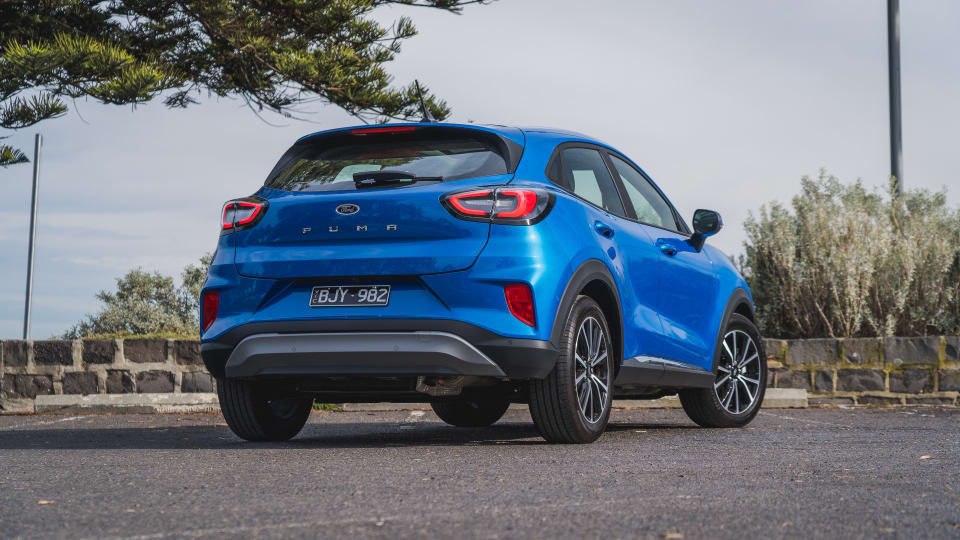 Ford Puma smashes it out of the park as a technologically advanced small SUV with space and a fun driving characteristic.

You do feel as if you’re getting a good value with features such as satellite navigation, wireless phone charging, auto high beam, rain-sensing wipers, LED ambient interior lighting, digital radio, and some nifty LED puddle lamps that display a puma cat.

There are also 17-inch alloy wheels, an 8.0-inch Sync 3 infotainment system with Apple CarPlay and Android Auto, as well as swanky massage seats – certainly an oddity at this price point.

The entire Puma range is powered by a 92kW/170Nm 1.0-litre, three-cylinder turbocharged petrol engine mated to a seven-speed dual-clutch automatic transmission. Power is sent to the front wheels.

The interior space of the new Ford Puma is a modern, functional space with a suite of neat features and cool tech. Cloth upholstery adorns the seats, which feels robust and built to last the distance (not to mention features a cool design), while the seats themselves are firm and supportive – especially around the shoulders.

There’s a good amount of space to get comfortable with in the front row, and the seats have a good level of adjustment to allow the driver to get a good perch to see clearly out of the cabin. Ford has employed a series of soft-touch finishes to cover most touchpoints, which is a point of difference for the segment, as many rivals tend to make-do with hard plastics on the door cards and dash tops, for example.

The plush leather-covered steering wheel is nice to hold, and contains a series of button shortcuts to operate different infotainment functions. The touchscreen is just a short reach away, and placed at the forefront of the dash for easy-access operation.

Ford says the Puma’s boot capacity is rated at 410L. It’s a respectable size for a small SUV, and a very useable space thanks to a false floor that allows for easy loading, a plastic-lined sub-floor cavity over the space-saver spare wheel, and a wide aperture to shove in bigger items. The cargo blind is also a neat unit that connects to the hatch rather than the back seats, which means the back seats can be folded down (60:40 split) without having to remove the blind.

Ford’s tried-and-tested Sync 3 infotainment system features in the Puma. It’s a simple system to become acquainted with, and features a series of shortcut buttons along the bottom, plus its clear and concise mapping is easy to get used to.
For those who prefer it, smartphone mirroring is on offer with both Apple CarPlay and Android Auto services covered.

FordPass Connect is available on the Puma, which allows an owner to check various car systems via a simple mobile phone application. It can tell you where your vehicle is, unlock the car, check the health of the vehicle, and display live traffic feeds.

The Puma has one USB-C port in the centre console, one USB-A port next to the shifter, and a 12-volt outlet for charging various devices.

The Ford Puma features start/stop technology, a radar-based adaptive cruise-control system, and a TFT display within the instrument cluster. While not a fully digital display, the small insert screen still allows the driver to view a digital speedo, control phone functions, change music and fiddle with the car’s functions.

Also of note is a rear-view camera with parking sensors, traffic sign recognition, hill hold and launch assist, as well as an emergency assistant that will automatically phone up emergency services if the vehicle detects a crash.

Its 92kW/170Nm outputs might not sound too hot on paper, but the 1.0-litre turbocharged three-cylinder engine of the Puma is a punchy and spritely unit. Peak outputs occur at 6000rpm (power) and between 1500–4500rpm (torque) – perfect for around-town duties.

It only has to shift 1264kg (tare) – which is a pretty standard weight for its class – but the pairing between seven-speed gearbox and turbocharged motor works in harmony for a pleasant little drive.

There’s a sense of hesitation when taking off from a set of lights, but it only takes a fraction of a second for the Puma to figure out what it’s doing and then snap into action. Once on the move, gearshifts are effectively unnoticeable, and the car responds diligently to sudden throttle inputs. Not only is the Puma’s powertrain competent, it’s also a quiet operator. Engine noise levels are kept to a minimum, while road and wind noise are also subdued.

There’s no doubt that the Ford Puma is a worthy addition to the segment. It’s the best, actually – hence taking out the segment win as Drive Car of the Year, best light SUV category.

It moves the game on in terms of interior presentation, in-cabin technology and useable space. It’s also a handy little steer that should have drivers smiling and passengers comforted – be it around town or on the open road.

The Ford Puma is a fun-loving type of car that, although priced at the higher end of the scale, will have owners feeling justified in their decision to pay that bit extra.