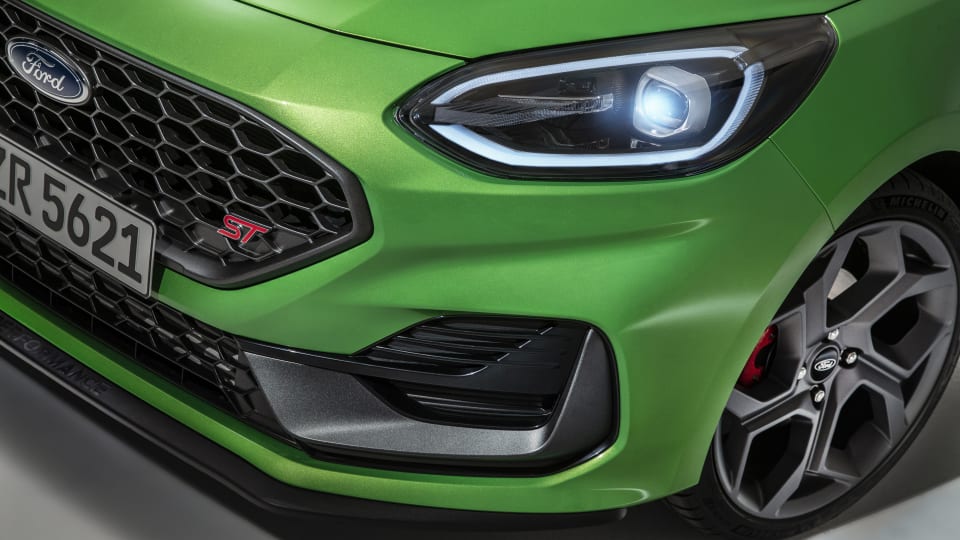 The 2022 Ford Fiesta ST facelift has been unveiled ahead of Australian showroom arrivals early next year.

The updated 2022 Ford Fiesta ST will gain “matrix” LED headlights (that ‘mask’ other vehicles so as not to dazzle oncoming traffic), a 12.3-inch digital instrument cluster, new sports seats, and a bump in torque for the perky 1.5-litre three-cylinder turbo petrol engine.

While the current generation Ford Fiesta ST is regarded as one of the best hot hatches of its generation, reviewers in Australia and Europe have previously called out the need for bigger brakes.

The current brake package is carried over from the previous generation Ford Fiesta ST, and while it can comfortably handle the daily grind, the brakes quickly fade when used to their potential on track days.

Photos released by Ford show a completely new nose (with ‘Ford Performance’ branding embossed on the lower lip), with a reshaped grille opening, the Ford oval moved into the grille mesh rather than up near the bonnet, and larger faux air intakes (now without fog lights).

The new matrix LED headlights promise to be a big step up from the LED projector low-beam and halogen high-beam headlights offered on the current Ford Fiesta ST in Australia.

The 18-inch alloy wheels gain a new, more aggressive design, though Ford is yet to outline whether they will continue to be wrapped in Michelin tyres or switch to a new supplier. Images released so far show Michelin branding on the tyres.

Although the front seats – developed in-house, rather than by previous supplier Recaro – look broader, Ford says they are designed to fit more snugly.

The tail-lights are said to have a darker accent, though this change is not obvious in these photos.

The current suite of advanced safety technology is expected to carry over from before, including autonomous emergency braking, speed sign recognition, lane-keeping assistance, blind zone warning, and rear cross-traffic alert.

Ford Australia says pricing for the 2022 Ford Fiesta ST will be announced closer to the car’s showroom arrival, which is currently slated for the first three months of next year.